You are currently only a Guest

The most important user interface enhancement is the introduction of a sorting feature to ensure that the panel is going to be displayed in the intended order (originally, the sort order was determined by your photo entry number, but once entered, the only visual confirmation was via the download of the proof sheet). 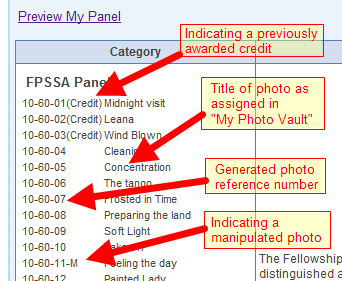 At the bottom of the overview screen you will see a summary of your entry. Each photo will be preceded with its panel photo reference number, followed by the letter "M" for manipulated photos, and then followed with the word "credit" in brackets for previously credited photos.

The original title of the photo (as named in your personal vault) will also be displayed as a visual confirmation of the order of your entry.

Use the Preview My Panel link to download a PDF generated proof sheet of your entry. The order and naming of the photos in the proof sheet will correspond with the display order during judging

In order to automate the honours panel submission it was necessary to change the panel reference number format. In the past the numbers consisted of 2 number pairs linked together by a slash (example 10/60).

The first very important change is to replace the slash with a hyphen, thus the number 10/60 must now be written as 10-60. This was necessary as the slash character is not allowed in filenames, and we use the panel reference number to generate the filenames for your photos.

For all new applications the panel reference number will consist of 3 sections. For example: 11-1-60

The first 2 digits still refers to the year in which you received your application number while the last 2 digits are a sequence number for internal use.

The last major change for honours applications is in the behaviour for the "Finalise my Entry" button. The first change you will notice is that the button is not available until you've entered all the photos for your panel. Secondly, you must take note that once you've clicked the finalise button, your panel is submitted and you will not be able to make any more changes to the panel.

Both these changes are necessary to streamline and speed up the honours application process. Firstly, during the first online entry in 2010 some applicants finalised their entries without all the photos assigned, resulting in an incomplete application. Secondly, in order to handle the large number of applications for one session it is necessary to start downloading the application images as soon as an application has been finalised - to download all the photos only after the closing date just takes too long. (The total number of photos that were downloaded for the June 2010 honours session exceeded 1 Gigabyte!)